A downloadable game for Windows, macOS, and Linux

The Septem Tower has held steady in the Manifold, the space between time and the Real, for billenia. Populating the Tower are the Anemoi, a race of beings so far advanced that they hold the power of life and death over all Lifeforms in the Universe.

The Worldsmiths are the greatest of the Anemoi, their sacred task to create Worlds and nurture Life until it is ready to leave its home and join the Galactic Accord - the parliament of the Real.

Now, the Tagides Rings, holding the Septem tower outside of time, are approaching perfect aphelion. Four apprentices remain but only one Worldsmith will be given the robes of the craft. It all comes to this. The Workshops are prepared. Come, apprentice. It is time to create your masterspiece.

It is time to build worlds.

Worldsmith is an exciting, immersive text game. Type in commands and explore the World, solve puzzles, talk to people and play the Game of Worlds. In Worldsmith, you control the story.

With over 150,000 words of text, Worldsmith is a full, novel length, Interactive Fable.

As you explore the world of the Septem Tower, you will create solar systems and Life, unearth ancient mysteries, and discover the secrets behind the Tower and its billion year mission.

Worldsmith will play in most web browsers, and can be played offline. Worldsmith plays best in a screen resolution of at least 1300x800.

Find out more at interactivefables.com. 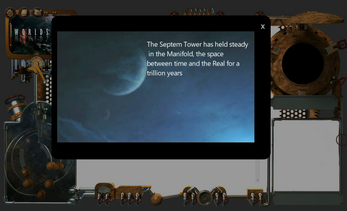 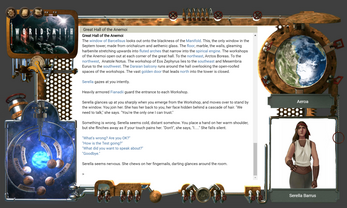 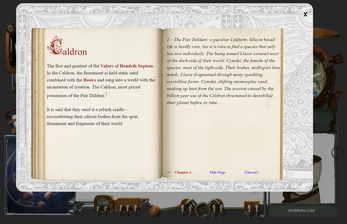